It was announced this week that London Borough of Hounslow has brought home no less than 16 Green Flag Awards for its parks and open spaces. 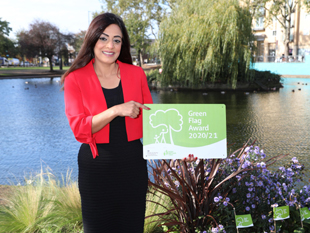 This is four more flags than last year and a new record high for the borough.

Bridge House Pond and All Saints Churchyard were both awarded green flags for the first time and Feltham Green and Redlees Park regained their award status once again. The new flags will be raised across the borough over coming weeks.

The awarding of 16 green flags is great recognition for the parks and open spaces in Hounslow, but local residents already know their value in a year where the borough’s green spaces have provided a reprieve in the midst of the pandemic.

The Green Flag Award scheme, managed by environmental charity Keep Britain Tidy under licence from the Ministry of Housing, Communities and Local Government, recognises and rewards well-managed parks and green spaces, setting the benchmark standard for their management across the UK and around the world. There are over 2,000 sites across the country collecting the Green Flag Award for 2020.

Cllr Samia Chaudhary, Cabinet Member for Leisure Services said: “We all know Hounslow is one of the most beautiful boroughs in London and it is great to have so many of our parks and green spaces officially recognised with a Green Flag Award.

“It is fitting to receive such recognition in a year where the value of having great quality green spaces nearby has never been clearer. I am also pleased to see one of our churchyards has received the green-flag status after the publication and implementation of our cemetery strategy.

“I would like to say a big thank you to the parks staff including those working for GreenSpace360, friends and volunteers groups, and the Green Flag Award judges for all their work this year.

“To mark this great achievement, we are running a competition on our Facebook and Twitter pages where we are asking residents to send us their best pictures of their favourite Hounslow parks. Check out our social channels now for details of how to enter, and the prizes on offer!”

Commenting on Hounslow’s success, Keep Britain Tidy Chief Executive Allison Ogden-Newton OBE said: “This year, more than ever, our parks and green spaces have been a lifeline and we know that millions of people have used them to relax, meet friends, exercise or simply escape for a short time.

“It is testament to the incredible dedication and hard work of parks staff and volunteers that, despite the challenges that went along with record numbers of visitors, Hounslow Council has achieved the highest international standards demanded by the Green Flag Award.”

The 16 parks managed by the London Borough of Hounslow which have been awarded green flags are: