Ever thought of becoming a Dementia Champion? Hounslow Council keen to boost its growing team of helpers 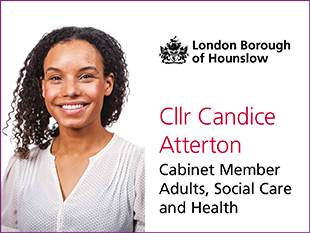 So far over 100 champions have been appointed but more are required to help with the growing number of sufferers particularly during the Covid-19 crisis.

Memory problems are one of a number of symptoms that people with dementia may experience. Others include difficulties with planning, thinking things through, struggling to keep up with a conversation, and sometimes changes in mood or behaviour. Dementia is not a natural part of ageing and it doesn’t just affect older people. Over 40,000 people under 65 in the UK have dementia. This is called early-onset or young-onset dementia.

Cllr Candice Atterton, Cabinet Member for Social Care & Health said: "Here in Hounslow, we have raised awareness to over 8,000  people living with dementia and appointed 100 champions in the last two years alone.  And all this was successfully carried out  through our communities and workplaces. We will continue to raise the awareness of dementia and become the very best we can to support those who live in Hounslow with the condition."

To find out more how you can get involved and raise awareness, please email - dementiaservices@hounslow.gov.uk

Nearly two years ago, a dementia advisor from the Alzheimer's Society knocks on the Isleworth front door of husband and wife couple, Min and Heather. Min had previously been diagnosed with the early stages of Alzheimer's but was still living a relatively active life.

Rebecca, the visiting Dementia Advisor takes up the story: "Heather and Min provided me with such a warm welcome and we were able to talk through what their experiences of Min having a diagnosis had been like. They were playing table tennis when I met them and they told me about their really active social life.

"They were interested in a Singing for the Brain Group, a scheme that was running locally by the Alzheimer’s Society and from this Min said that he wanted to be referred to this group. This group is also for family carers and both Heather and Min have been regular participants and when the appropriate music is played they often take to the dance floor. Heather and Min are such a lovely and inspirational couple and were regulars at the Memory Café run by Home Instead in Brentford."

Away from home, they used to holiday regularly with a group of fellow British Airways retired staff. One of their most memorable breaks being a fly/coach trip to Croatia and Slovenia. Says Heather: "We flew to Dubrovnik only last autumn. From there we spent at few days exploring the Croatian coast before travelling to Lake Bled in Slovenia. It was lovely to see Min enjoying it so much. He could really appreciate the beauty of the countryside and the friendliness of the local inhabitants. We also enjoyed short breaks in the UK, days out and theatre trips with the same group of friends."

Fast forward to mid 2020 and everything has changed. For one crucial difference, Min is 'shielded'. He has multiple health problems, including a heart condition and auto immune disorders. Shielding means he is totally confined to the house and garden and with none of their relations living close by, life has proved to be very difficult during lockdown. However, they have both embraced digital technology joining the virtual singing sessions, of which Hounslow was only the second borough to go live with it. They also keep in touch with family and friends by WhatsApp video or Zoom but when they are using virtual technology Min always thinks the people he is talking to are in the house and when they leave, he wonders where they have all gone.

Then there is the deterioration of Min physically during this two year period. He can no longer dress or shower himself. His ability in the kitchen is limited to boiling a kettle. Whereas until very recently, he used to walk 400 yards to the post box on his own, he can no longer even attempt this as he cannot lift his feet easily so is likely to trip over the slightest incline in the pavement at a moment's notice. He has had several falls over the last few months.

Heather says other things have captured his imagination during lockdown. "He has become a fanatical bird-watcher. We have put up eight feeders in the garden and every day we have regular visits from numerous different species. Min's favourite is the greater spotted woodpecker. We both spend a lot of time enjoying the antics of the parakeets, squirrels, foxes and birds, especially the baby starlings who just love splashing about in the water we put out for them."

Back to Rebecca the dementia advisor who says: "In February of this year Heather and Min came to the Alzheimer’s Society café run at Bristol Court. Heather and Min are so friendly and supportive when they meet other people with dementia and their carers. They also went to one hosted by the Danehurst day care centre. They both literally do light up a room. Due to COVID-19, our face to face groups have stopped for now although Heather and Min have participated via Zoom recently in our regular virtual sessions for Singing for the Brain. In my role, I have been able to keep in touch also by telephone to chat to both Heather and Min to see how they have been getting on with the lockdown, and even though times have changed, it is still a pleasure to continue doing what I can to help them".