The results of Hounslow Council’s goat-naming competition are finally in and the news was shared with all concerned at a special goat-naming ceremony this morning. 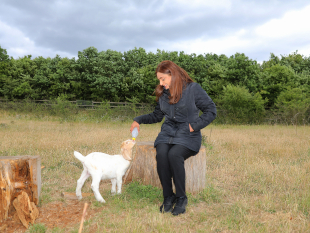 The results of Hounslow Council’s goat-naming competition are finally in and the news was shared with all concerned at a special goat-naming ceremony this morning.

The triplet kids are now called London, Borough and Hounslow…. JUST KIDDING! Butch, Cassidy and Sundance was announced as the winning entry today, on World Environment Day, and the trio took part in a photoshoot to celebrate the occasion, with Cabinet Lead for Leisure Services, Cllr Samia Chaudhary and some other special guests!

Naming the animals, whilst being good fun, can often taken a little time due to the emerging personalities of the animals in question. As such, when these male triplets were born, the GreenSpace 360 Countryside minders put a special request out to the borough’s residents, asking for help to name them.

And Hounslow answered the call.

Suggestions came pouring in – with excellent references to literature, music, tv and film, and instead of (virtually!) butting heads in Hounslow House to select the winning names, a shortlist of the best entries carefully selected by a panel of judges was put to the public in a poll on social media.

Cabinet Lead for Leisure Services Cllr Samia Chaudhary said “the residents of Hounslow have loved getting involved in naming the kids – it’s been really great to see so much fun and engagement from the public.

“However it’s World Environment Day and these goats aren’t just cute to look at. They play a very real role in protecting our environment by grazing private nature reserves, meadows and habitats around Hounslow. This allows a greater diversity of flora and fauna to flourish than could be achieved with mowing. GreenSpace 360 works with Hounslow Council to use not just goats but also cows and sheep to graze across the borough. The programme is part of a stewardship grant from Natural England.”

This year’s World Environment Day theme is biodiversity which is something our grazing goats play a huge role in maintaining. Grazing has a number of benefits including the removal of dead grass, scrub clearance and litter reduction. This in turn increases biodiversity at sites, allowing different plants and grasses to grow, as well as being advantageous for other animals, birds, insects and ecosystems.

Butch, Cassidy and Sundance have been doing very well over the last few weeks and are already out grazing, along with their mother, exploring their current site and getting acquainted with their fellow herd members.

And there's always a sprinkle of mischief!

“The triplets are very high-spirited and are always up to something - they follow each other around and really are partners in crime so the names fit them perfectly!” says Michaela Terry, Countryside Manager at GreenSpace 360.

The social-media series following the adventures of the various young lambs and kid goats at Bedfont Lakes Country Park has been very successful and was originally proposed as an effort to help lift the spirits of borough residents. We think Butch, Cassidy and Sundance and all their animal friends have done just that!