A road in Chiswick has been closed to through traffic from today as the latest in a series of fast-tracked measures to improve safety for cyclists and pedestrians goes live. 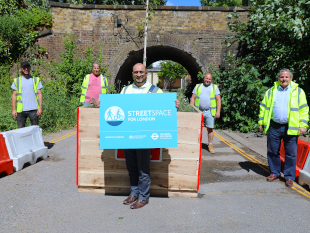 Dan Mason Drive in Dukes Meadows has been closed at a location where the road is narrow and visibility is poor, to prioritise the safety of those travelling by bike and on foot to this popular park, and to ensure there is enough space for these users to adhere to social distancing guidelines.

The road is closed at the railway bridge and the closure will be in place for a minimum of six months. All premises in the park can be still be accessed by vehicle if required, either via Riverside Drive or Dan Mason Drive.

Earlier this month, Hounslow Council announced a range of transport measures it would be implementing across the borough as part of its response to the coronavirus crisis. As more people start to move around London these measures will help ensure residents can socially distance and ensure more space is provided for those choosing to walk or cycle, in line with central government guidance. Increasing trips made on foot or by bike can help reduce congestion for those who absolutely need to use a vehicle and will also help maintain the improved local air quality achieved in recent weeks.

Cllr Steve Curran, Leader of Hounslow Council said: “This is just one of many measures we are implementing to make it safer for people to walk and cycle while social distancing across the Borough. We are also keen to lock in some of the positive benefits we have seen in recent weeks such as improved air quality. We are also progressing trial closures to remove through traffic at Occupation Lane and Green Dragon Lane which we plan to implement in the summer. There will also be permanent measures introduced to close Lionel Road South once the stadium works are complete, and to stop people leaving the motorway at Heston Services and accessing local roads.

Construction work has recommenced and is being accelerated on a number of improvement schemes across Hounslow to make more space for pedestrians and cyclists. Plans for another road closure, at Wellesley Road, are with the Council for implementation shortly, while parking has been suspended in certain areas with temporary barriers installed to widen the footways to provide more space. A number of new traffic reduction schemes are due to be brought forward as part of the South Chiswick Liveable Neighbourhood project.

Bus lane hours across the borough are due to be extended to 24/7 where possible from mid-June onwards, while School Street schemes (which restrict access to roads outside schools at busy times) have been approved at four separate schools; the schemes will be implemented as soon as is practicable. Further engagement at other sites will start shortly.

A consultation requesting resident input on where Hounslow Council can do more to help ensure social distancing and improve streets for walking and cycling was also launched earlier this month. So far there have been over 800 visitors to the consultation website and over 250 comments posted. The consultation will be live until 25 June and more feedback is welcome. Council officers are regularly reviewing the feedback received and taking forward a number of suggestions for further feasibility.

Cllr Hanif Khan, Cabinet Member for Transport and Corporate Property, said: “With restrictions lifted there are more people out and about and returning to their place of work, but increased movement is only on condition that social distancing is adhered to. The Council has a duty to ensure people can comply with the Government’s rules and get around the Borough safely. There could be varying forms of social distancing for many months to come so it’s important we take action now to ensure all possible measures are implemented as soon as possible and that’s exactly what the Council has been doing.

“We know there will be lots of creative ideas out there on other things we can do and that’s why we set up the consultation asking for resident input on where the Council can do more to help. We’ve already received a lot of interesting and helpful feedback from the Hounslow community so keep your ideas coming!”