Vote on the best names for our kid goats!

Hounslow Council and GreenSpace 360 have announced the four entries shortlisted in their competition to name goat triplets. 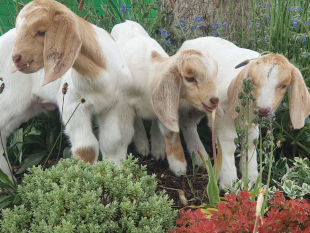 On 30 April, the three goats were born at Bedfont Lakes, and there was a call-out on social media over following weeks asking Hounslow’s residents to name them.

The people of Hounslow answered the call and there was no shortage of suggestions for the kid cuties.

Below are the four entries shortlisted by the judging panel:

Hounslow Council is now, again, looking to the Borough’s residents to make the final decision on naming the kids: vote in our polls which went live today on the Hounslow Council Twitter and Facebook accounts. Polls will be open until Thursday 28 May so make sure to get your vote in to have your say on the naming of Hounslow’s triplet kids!

The goats who are all male, are the Anglo X Boer breed. The trio spend most of their time together, following each other around, exploring their home and getting up to mischief. A few of the nannies gave birth to twins or triplets this year, so there are a lot of kid goats bleating at each other all day long!

The goats live at Bedfont Lakes Country Park which is run by GreenSpace360, a wholly-owned subsidiary of Hounslow Council. Since March 2018, GreenSpace360 has managed and maintained the parks and open spaces in the borough and employs countryside rangers who keep goats, sheep and cattle to graze various meadows and habitats around Hounslow. This allows a greater diversity of flora and fauna to flourish than could be achieved with mowing. Grazing leads to a variety of sward heights which facilitate the growth of less advantaged flowers and plants and can attract ground-nesting birds. This grazing programme is part of a stewardship grant from Natural England.

Cllr Samia Chaudhary, Cabinet Member for Leisure Services said: “It’s been lovely to watch the adventures of the lambs and kids at Bedfont Lakes over recent weeks as they’ve been stars on social media. We don’t often get a chance to see this side of the rangers’ work. Grazing is a large part of the countryside team’s responsibilities, so it’s been good fun “getting to know” some of the animals used for it. I’m looking forward to seeing which names are chosen!”

The kids are currently in the Animal Antics sanctuary within Bedfont Lakes Country Park as their mothers were moved there during the latter stages of pregnancy. When the yet-to-be-named goats are off their bottle feed and sufficiently strong, they will begin grazing, and will be rotated around the borough’s grazing sites.

Larger breeds of goats are predominantly used for grazing, such as Anglo-Nubian, Boers and Saanens. The goats graze on nettles, bramble and scrub in the borough’s private nature reserves, ensuring the bat glades stay open. The goats are also used to “mob graze” soft rush on some of the borough’s flood meadows.

Sheep are also part of the grazing programme and they can be seen on the wildflower meadows at Bedfont Lakes through late summer and early winter. The flock is typically made up of Suffolk Mules, Texal and Beltex. Bedfont Lakes is also home to an adopted orphan Shetland Lamb named Billy, who has proved very popular on social media!

Michaela Terry, Countryside Manager for GreenSpace 360 said: “It's been great to be able to continue with lambing season this year. Lambing season typically runs from March-June and a ewe (female sheep) or nanny (female goat) will be pregnant for about five months. Normally the team is very busy at this time of year with group activities, birthday parties and volunteer sessions so the lambs and kids have provided us with some much-needed fun and frivolity during lockdown.”