Hounslow’s Community Foodbox, which provides essential food supplies to the needy all over the borough, received high praise from an unusual source this week. 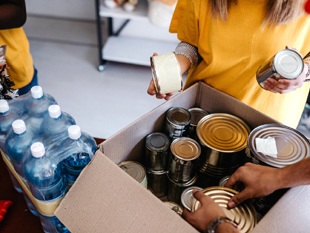 In a letter written by Sir Kenneth Olisa OBE, Her Majesty’s Lord-Lieutenant of Greater London to Philip Jones, the Foodbox Treasurer, he said:

“My representative, the Deputy Lieutenant of the Borough of Hounslow, Paul Kennerley tells me of the impressive way in which you, your trustees and your volunteers have responded to the public.  I must commend the way in which you have engaged with local businesses to cement a truly community response”.

Cllr Corinna Smart, Chair of Hounslow Community Foodbox said: “As Chair of Trustees I welcome the recognition that our volunteers have received for all their hard work not just at this present crisis but throughout all the years we have been running it”.

Cllr Guy Lambert, Vice Chair, was not surprised by the letter: “The work our volunteers have been doing within this particular Foodbank has been quite fantastic, and so they fully deserve the lovely comments made by Sir Kenneth.  They reacted very swiftly to the dramatic increase in demand for food parcels since the crisis started about six weeks ago.  I must also share our praise with the public, who have responded magnificently with donations of both food and funds, and our wonderful suppliers such as many of the major supermarket chains who have continued to supply us with the essential food offerings”.

Sir Kenneth opened his letter with a sentiment shared by millions of others when he said: “How did a country so divided over Brexit manage to pivot in a matter of days to become one of the worlds most unified communities”.