We’re now fully back into the swing of things and the New Year celebrations are well behind us.

I was glad to see that Brentford FC got off to a flying start in the local West London derby with a three – one victory against the old enemy (Queen’s Park Rangers)!! I didn’t go to the match but could hear the roar of the Bees’ fans echoing around Griffin Park.

On Sunday, I got up early to go to a leafy Surbiton, where I met with the Mayor of London, Sadiq Khan. I joined the Mayor as he visited residents in Surbiton and in leafy Ham in Richmond.

On Monday, I worked from home, making the most of the council’s flexible working arrangements which we call Worksmart. Many of our staff use flexible working to make sure they can visit residents and meet with customers off site, or work remotely in other ways, and we all have good IT equipment to enable this. I took this a stage further by having a conference call meeting with Amy Lamé, the Mayor of London’s Night Czar. The council wants to ensure that everyone can enjoy a night out without harassment, irrespective of gender, sexuality, background, race or religion. Find out more about the Good Night Out campaign which we  launched in Chiswick.

In the evening, and the highlight of my day, I attended Cabinet Question Time in the Heston and Cranford area. You can listen to the questions our residents put to us and hear our answers.

On Wednesday, along with Cllr Samia Chaudhary, Cabinet Member for Leisure Services, I met with Bev Ward, Senior City Host Manager at the FA. This was my first meeting to discuss the planning for the Women’s European Championship in 2021. Four games are being hosted by Brentford FC in their new community stadium. This is fantastic news for Brentford FC and for whole of the borough of Hounslow. This event not only has national coverage but reaches a worldwide audience and we will see hundreds and thousands of visitors coming to Hounslow. Working with the FA and Brentford FC, we will do everything we can to make it a successful tournament and to showcase the London Borough of Hounslow at its best. 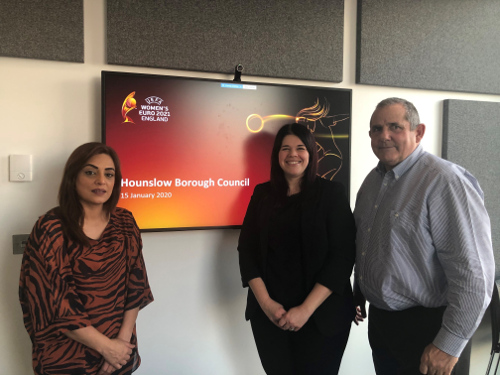 In the afternoon, we had a photoshoot for the Great West Magazine. This magazine showcases Hounslow to the development and construction industry. It’s important that we have continued investment in the borough for new homes, jobs and leisure. On that note, we’re also finalising our plans to go to MIPIM in France in March. This is an international conference and exhibition where we showcase the best of Hounslow to attract that investment and support our ambitious plans for the borough. For those who are interested, our trip to MIPIM is fully funded by sponsors and there is no cost to residents.  We will make sure that copies of the magazine are available in all libraries after March 2020. 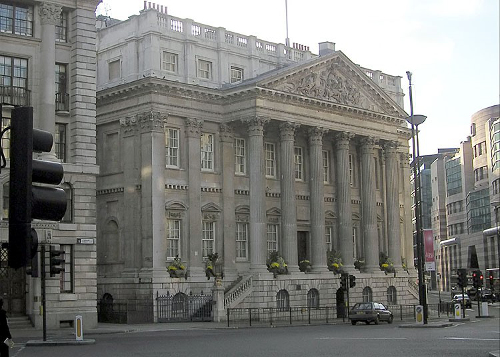 This morning, I attended the London Councils’ Labour Group meeting being hosted by Camden Council. In the afternoon, I joined Assistant Director for Planning, Sarah Scannell, on a site visit to the new Barrett development in Hounslow High Street (High Street Quarter). 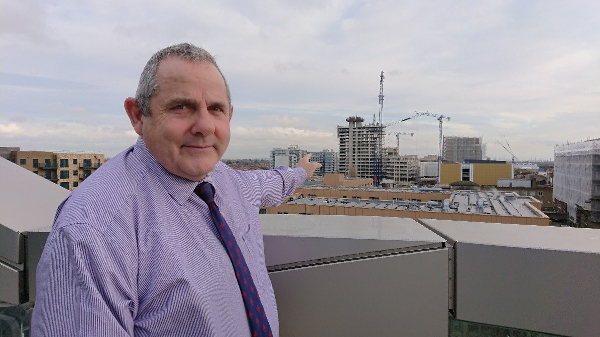 The emerging tower from the Barratt Development in Hounslow High Street

If you’ve visited Hounslow High Street recently, you will have noticed the tower emerging out of the ground. It’s not yet at it’s full twenty-seven stories but it’s on its way.

I will be holding my usual monthly surgery from 11am on Saturday morning at 1 Augustus Close, Brentford Dock. You can find all the information about my surgery online.

Many of you may be inconvenienced by the road and utility works being undertaken in the borough at the moment. We are working very closely with TfL and the utility companies to keep this disruption to a minimum. But, unfortunately, sometimes it cannot be avoided. You can find information on all the roadworks by visiting the One.Network website and by checking the TfL website.

We have quite an exciting weekend of sport ahead of us with the Bees making the journey north to Huddersfield on Saturday for their next league match. Let’s hope the Bees can keep up their great record against the Terriers who are currently 20th in the table. London Irish rugby take on second place Scarlets in their next European Challenge Cup fixture. London Irish must hold off a hungry Welsh team looking to get into the top eight.

In cricket, England face South Africa in the third test of the series which is currently tied one all. England chose to bat first on Thursday (16 January) and have declared 499 runs for nine wickets. Come on England!

We’re expecting the temperature to drop this weekend so please remember to wrap up warm and check up on any neighbours that may be affected by the cold weather. Remember you can always report any rough sleepers to StreetLink.

Have a great weekend all!