On Saturday, I had my monthly surgery at Brentford Dock. I met with three residents where we discussed Housing issues and settled status for EU residents. You can find out more about the EU Settlement Scheme online.

I was delighted that England smashed South Africa in the third test winning by an innings and fifty-three runs. The bees couldn’t quite keep up their winning streak but had a respectable nil-nil draw against Huddersfield Town. I hope all the supporters, players and staff had a safe journey.

On Sunday, I went out with my fellow Syon Ward councillors to see residents. We were joined by Ruth Cadbury, MP for Brentford and Isleworth.

It was an honour and a privilege to be invited by the Mayor of London, Sadiq Khan to attend the Holocaust Memorial Day Service at City Hall with Cllr Raghwinder Siddhu, Deputy Mayor of Hounslow, overall, it was sobering and heart-rending to hear the first-hand accounts from Lily Ebert, survivor of the Holocaust and Sabit Jakupovic, survivor of the genocide in Bosnia. 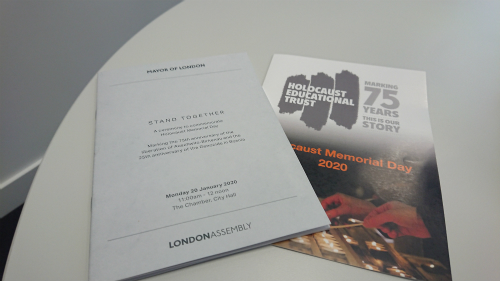 We must never forget.

I will be attending the Hounslow Holocaust Memorial Day Service on Monday 27 January.

On Tuesday afternoon, I chaired the West London Skills and Employment Board, where I represent the West London Alliance (WLA). For more information visit the WLA website.

Later in the afternoon, I was interviewed by a South Korean television crew! They were particularly interested in the proposed third runway at Heathrow and how the consultation is being run.

In the evening,  I chaired the council’s Cabinet meeting, I was particularly pleased about two of the reports that were approved -  the first being the Climate Emergency Action Plan and the other  the Regeneration Programme for Housing Estates in the borough. You can find out more information about the full Cabinet meeting online.

On Thursday, I went to Feltham Green (Pond), where I met with children from St Lawrence Catholic Primary School in Feltham and council officers from the Parks team. I was joined by Hanworth Park ward councillors, Cllr Hanif Khan and Cllr Bishnu Gurung.

Whilst at Feltham Green, I had the pleasure of meeting falconer Martin Cattell who has over 40 years’ experience of handling different types of birds of prey, and 16-year-old Harris Hawk, Katie. 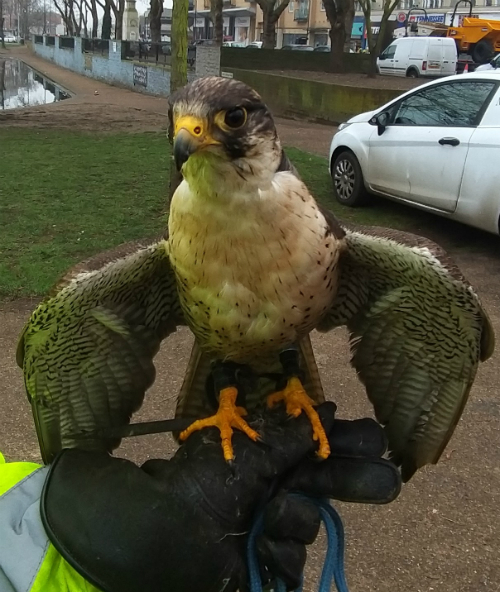 Residents and park users have been complaining at the number of pigeons that flock to the area due to people feeding them.

They have now become a real menace and health hazard.  We’re working very closely with the Friends of Feltham Green (Pond), in particular Angela Parton who chairs the group.

Congratulations to Michael, aged nine, for designing the winning poster and the runners-up! If you are in the area, pop along to see the posters which are on display and the newly refurbished pond.

Thursday evening, I met with Mayor of Hounslow, Cllr Tony Louki and Harpal Bawar at the Indian Gymkhana Club in Osterley to discuss some issues relating to the shared sports facilities with St Mark's Catholic School. Today, I went out and about in the borough to meet with local business representatives and residents.

It’s an exciting weekend for football fans as Brentford FC take on Leicester City at home in the fourth round of the FA Cup. The Bees have a great chance to win following their most recent performances in the Championship. For all rugby fans, the Six Nations is just around the corner. England take on France in the first match of the tournament on Sunday 2 February. The first home fixture at Twickenham Stadium is against Ireland on Saturday 23 February, it should be a real nail-biter! England have put together a strong 32-man squad with 22 being in last year’s World Cup final.

London Irish take on second place Saints (Northampton) this evening (Friday 24 November) in the Premiership. I wish the boys the best of luck.

In the cricket, England have a comfy two – one lead going into the fourth test. The boys are currently out on the crease having chosen to bat first and are doing well.

It’s set to be a gloomy weekend, so make sure to wrap up warm if you’re heading into town and carry an umbrella as we may see some rain on Sunday.