Last weekend, the Bees drew against Blackburn Rovers. A valiant performance by both teams. On Sunday, I attended the England vs Ireland Six Nations fixture at Twickenham Stadium. I felt there was as subdued an atmosphere in the stadium as with the Irish team. Although Ireland rallied at the end, the outcome was never in doubt. Congratulations to England!

On Monday, I attended a retirement presentation for a colleague who has worked for the council for over forty years. Like Dave, I’ve worked in public services all my working life, in my case the NHS, and which, like Dave, I am rightly proud of. I was particularly interested to see that Dave first joined as an apprentice and has since taken on the mantle for mentoring eight more apprentices in his time at the council. That is just fantastic. As many of you know I am a huge fan of apprentices – we have over two hundred throughout the council, and as many as ten in COALO, long may that continue. 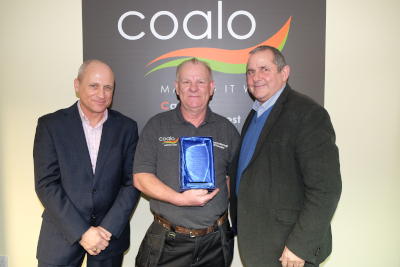 On Tuesday, I was in the office preparing for the Borough Council Budget meeting. I also had a series of one to one meetings with senior council officers. In the evening, I attended full Borough Council where we discussed the council budget for 2020/2021. If you missed it, we did our first livestream of Borough Council. You can find a link to the livestream here. A link to the agenda can also be found online. 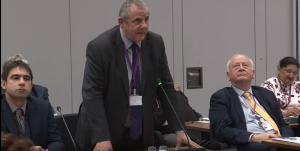 Me, speaking at Borough Council.

Wednesday was another action-packed day, I attended the WOW London event at the University of West London (UWL). This was an opportunity to engage and network with other senior council representatives (leaders, deputy-leaders, chief executives and other senior officers) and peers from the private sector. We also found out useful and exciting information about major projects in the surrounding area. I was also one of the guest speakers on the panel.

Myself with panel members and fellow Leader, Julian Bell (in the red tie) at the WOW London Conference, UWL.

In the evening, I joined fellow cabinet members at Brentford Free Church for Cabinet Question Time. There was a small but select audience. We had some very challenging questions particularly on the A4 and who is responsible for cleaning it TFL or Highways England?! We also had several questions on planning matters in Brentford and the environment. Thanks to Dominic West, the independent chair of the meeting. 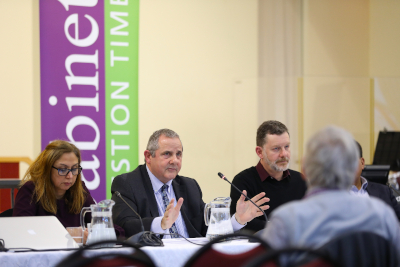 Me at Cabinet Question Time at Brentford Free Church, with Cllr Lily Bath and Dominic West our independent Chair

On Thursday morning, I was invited by Alan Rides, Managing Director of the Hounslow Chamber of Commerce for a business breakfast meeting at the Holiday Inn, Brentford Lock. Here, I spoke about the importance of the SME supply chain and that small businesses are the glue that holds the borough together, especially for local jobs and apprenticeships.  I was also promoting the upcoming Hounslow Festival of Business Awards due to take place in the autumn. 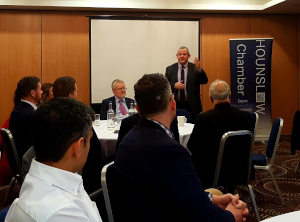 Speaking at the Business Breakfast at the Holiday Inn

Later in the morning and most of the afternoon I hosted representatives from twin town Issy-les-Moulineaux, a suburb in Paris. Over time we’ve struck up a very strong bond with them, they were only here for the day (Eurostar) so we had to pack a lot in.

As well as meeting reps from the Chamber of Commerce they also met students and teachers from two of our secondary schools as we are looking to re-establish the French language exchange programme between ourselves. After the visit our guests attended the BSkyB campus in Osterley. I would like to thank BSkyB for being such great hosts. We then went to JCDecaux, one of our premier European businesses, where we discussed the possibility of work experience for residents living here or in France.

I was particularly pleased to meet with Alain Levy, Deputy Mayor, who I have met previously. Find out more about Issy-les-Moulineaux 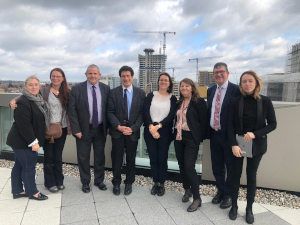 After Lunch I had the privilege of opening the first Climate Emergency Action Plan Consultation event held at Hounslow House. Unfortunately, Councillor Katherine Dunne, Cabinet Member for Climate Emergency and Communities was unable to attend due to work commitments. It was a pleasure to see so many people from many backgrounds in our community who were deeply concerned about the climate emergency and wish to work with the council to help our commitment to be carbon neutral by 2030. 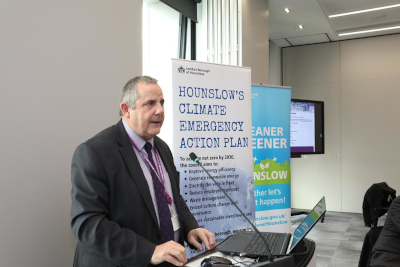 It was a very wet and miserable start to today (Friday), however, it was for a good cause to clean up the canal embankment by the Holiday Inn in Brentford. Today was the third day we have been clearing the site ready for the planting of new trees and plants in March and early April. We’ve been working with volunteers from JCDecaux, London Wildlife Trust and the Canal and River Trust. We’re also going to be repairing and repainting the canal bridge and have been working with the Green School for Boys and Girls, Hounslow Highways and OctInk and not forgetting the council officers who are also involved in the project. 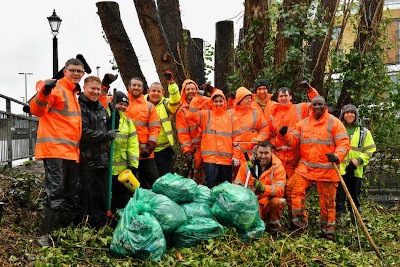 Group photo of the team who took part in the Brentford Bridge clear up this morning.

I realise everyone is very concerned about the coronavirus (COVID-19), I want to reassure residents that our Director of Public Health, Kelly O’Neill, is working very closely with Mayor of London’s office and Public Health England to ensure that we have the best resilience plans in place and ensure that we are ready for any eventuality. Please do follow the advice to Catch it. Bin it. Kill it

Good luck to Brentford FC who are playing eleventh place Cardiff tomorrow (Saturday 1 March). I hope the team and travelling fans have a safe journey out to Cardiff. I would also like to wish good luck to London Irish who take on the Wasps this Sunday in the Premiership.

The weather forecast is again not very good this weekend. So please wrap up warm, look out for each other and have a good weekend.