It’s been a cold and wet start to June, typical British weather!!

Please remember, we are still in lockdown. The current restrictions mean we can now meet up with up to five friends or family members, providing you stay outside either in parks or gardens, but we must keep 2 metres distance from anyone not in our own household. From tomorrow, adults living alone or single parent families can join a ‘support bubble’ with one other household and spend time together inside each other’s homes, and places of worship are open for individual prayer. Stay alert, control the virus, save lives.

On Monday morning I met Martin Clack, Divisional Director of Hounslow Highways, at Brentford Bridge to inspect the new colour scheme! We also discussed access for the ongoing upkeep of the canal embankment, as we plan to install a kingfisher bank and new perennial plants for the benefit of existing wildlife, to attract more species and improve biodiversity. It’s an exciting project, I’m pleased to see the plans coming together. While I was there, a couple of passers-by commented on the restored look of the bridge, one saying, “its magic” and the other complimented on the “traditional railway colours”. 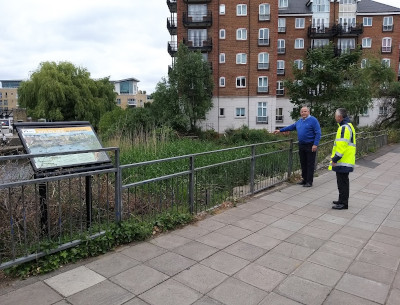 Martin Clack and I social distancing at Brentford Bridge! 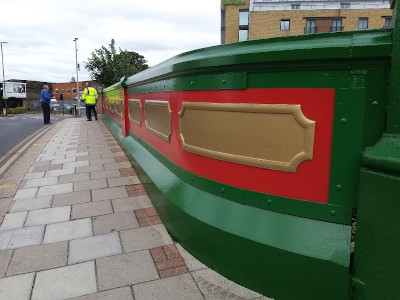 I would like to thank all those colleagues involved in this project; they’ve been working incredibly hard to keep progressing work on the site whilst observing social distancing. A big thanks to Hounslow Highways, London Wildlife Trust, Canal & Rivers Trust, JCDecaux, Octink, the Green School for Girls and Boys, as well as Council officers who have continued to push forward improvements here for everyone to enjoy. 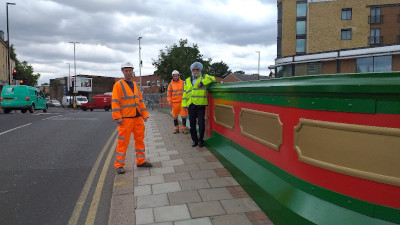 As I walked back home along Brentford High Street from my meeting, I saw a young man sitting at the bus stop, spitting repeatedly on the pavement! I asked him to stop spitting, but to no avail. Coincidentally, not so lucky for him, a police van followed by a police motorbike drove past and stopped as I waved! The police officers did a great job in speaking to the young man and instead of issuing him with a ticket, they made him clear up his mess by getting a bucket of soapy water and broom from one of the shop keepers (restorative justice at its best!). I’m sure I don’t need to explain why spitting, especially in public, is totally unacceptable, especially during a public health pandemic.Furthermore, it is illegal!! 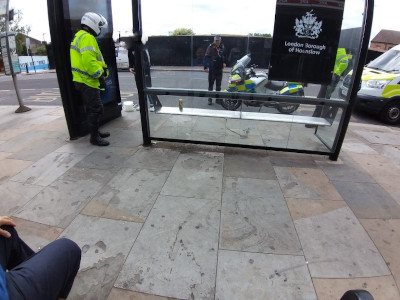 On Tuesday morning, I was interviewed by local journalist and representative of Brentford Voice, John Dale. If you would like to hear my views on the impact on employment as a result of the downturn of the aviation industry and more on future Council meetings, watch the interview.

While being interviewed by John, I met two workers from Greenspace 360, one of the Council’s companies. They were tidying up the grounds at Brentford Library by the War Memorial - unfortunately, some people have no respect for their surroundings and frequently leave litter there. This is not respecting the war memorial and the grounds, and more importantly its disrespecting all those who made the ultimate sacrifice for their country. 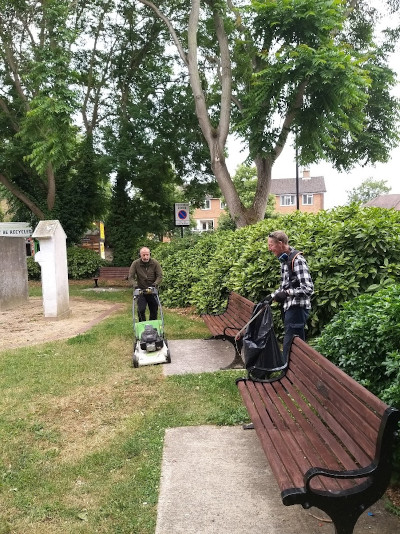 Thanks to the guys for doing a great job!

Shortly after, I was interviewed by Bridget Osbourne, local journalist for Chiswick Calendar, focusing on the Borough’s economic recovery as a result of coronavirus. As Hounslow is expected to be the second hardest hit borough in London economically, it’s a matter on all our minds. Also featuring our Chief Executive, Niall Bolger – it’s an interesting read.

On Wednesday, I was back with Chiswick Buzz TV for my weekly interview with Lorna Ko. You can watch it here

On Thursday, I attended the funeral of former Councillor and Mayor (1999-2000), Gopal Dhillon, who passed away at the end of May 2020. It was an honour to join a small group of his family and friends, due to coronavirus restrictions in place. Gopal will be missed by former and serving councillors, as well as many residents he helped over the years. 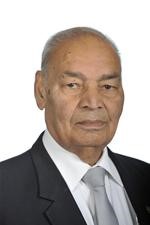 On Friday I was interviewed by China Global Television Network. I was asked questions regarding our economic recovery plan and how I think the borough will be affected by the massive contraction in the aviation industry which potentially will have a devastating impact on jobs in Hounslow and West London. For those of you who think it’s a long way to come for an interview just with me, CGTN is based in Chiswick Business Park!

You can read the report I presented to Cabinet last week, detailing the Borough’s response and recovery to the coronavirus crisis. You can also watch the Cabinet meeting which was live streamed.

From Monday 15 June, many non-essential retail stores will reopen their doors to customers. However, there will be measures in place for the safety of staff and customers. Some shops will be allowing in limited numbers of customers and there will be  one-way systems in place. I ask you all to respect these rules, so we can ensure we are all shopping as safe as we possibly can in our shopping parades and highstreets.

I want to remind our local businesses of the discretionary business fund the Council launched recently to support small and microbusinesses in the borough. The new Discretionary Business Support Grant is intended to aide those businesses who have so far not been able to benefit from the funding from central Government during the coronavirus pandemic. Read more in the statement from Cllr Shantanu Rajawat, Lead Member for Finance and Corporate Property.

Also, from Monday, it will be compulsory to wear a face covering when travelling on public transport. TfL introduced this change in line with the Government and NHS England’s advice, and as we will start to see our roads and streets busier with more businesses reopening.

The mobile test centre for coronavirus will be available again on Monday  and Tuesday, 10.30am - 3.30pm, at Grasshoppers’ Rugby Club, Syon Lane, Osterley, TW75PN. There is a mixture of walk-in and drive-through appointments at this test centre. You can book your appointment 48 hours before via the NHS website. If you have any questions about testing, please contact publichealth@hounslow.gov.uk.

Once again, thank you to Grasshoppers RFU, for their support for testing in the borough.

Have a good weekend everyone, stay safe.