The week started with meeting a lovely resident who lives in Syon Ward area of Brentford on Monday, who was having some difficulties with her home and after a constructive meeting, most of those issues were dealt with and I’m pleased to say the rest are in hand.
As I do regularly, I met with another Council Leader; this time Cllr Ravi Govindia who is my opposite number at Wandsworth. Clearly, we have mutual interests for the people of West London, but it is also very interesting to bounce ideas off each other.
On Tuesday, I attended an important meeting at London Councils which took up most of the day. The agenda to this meeting is on the London Councils’ website.  Unfortunately, this meant I couldn’t attend our Air Quality workshop. I would like to thank Cllr Katherine Dunne, who has the lead responsibility for improving Air Quality in the Borough.
More than 150 people including residents, businesses, community groups and elected representatives gathered for the climate emergency workshop this week to suggest how Hounslow Council can help address the worldwide problem of climate change at a local level.
On Wednesday morning I was back in London attending the 2020 Upfront Event with one of our partners, JC Decaux, the advertising company situated in the Golden Mile on the A4. JC Decaux are supporting us in our bid for Borough of Culture, 2021, please look out for the adverts. Don’t forget, you can post an image taken in the borough of anything cultural – it can be a performance or a favourite place to eat or an occasion – please again include @LBofHounslow @MayorofLondon #GoHounslow and #HounslowCulture21
In the afternoon, I attended our allotment seminar where I addressed a very keen audience in the Holiday Inn, Brentford.  Cllr Samia Chaudhary, Lead Member for Leisure Services also spoke and the National Allotment Society were also represented. I was pleased to say I learnt a lot about allotments, particularly how they work and run. We are keen to provide and improve the allotments service because we know and understand how important allotments are to our residents and communities. I made a clear commitment that the Council has no plans to build on allotments!  Here I am with Niki Dunsby from Hatton Road Allotments and Mark O’Brien, Chief Operating Officer of Majorie Kinnon School in Bedfont. 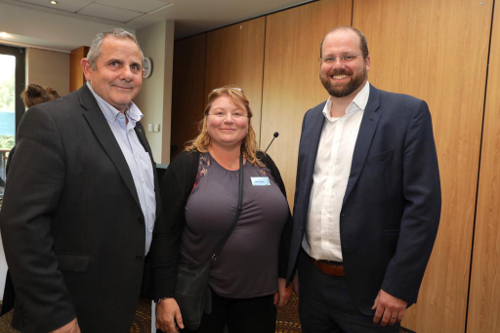 It was World Mental Health Day and we had a visit from a Government Minister, Nadine Dorries MP who attended one of our excellent special needs school, Springwell School in Feltham.  Here she is below with Sara Saunders, Implementation Lead NHS England; Susie O'Neill, Senior Joint Commissioning Manager, Hounslow; ND; and Ellie Tobin from Hounslow Council. 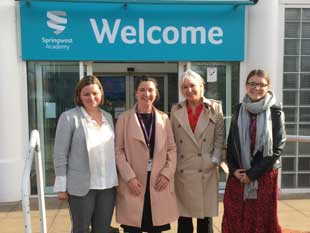 Thursday, I attended West Thames College for celebrating social integration, part of Black History Month. I would like to thank West Thames College for supporting Black History Month, the highlight of the afternoon was to see four brilliant two-minute films about ordinary people living and working in the borough under the title of My Hounslow, directed and produced by the students themselves. They are a credit to the college and Hounslow. I would also like to thank our two local MPs, Ruth Cadbury and Seema Malhotra for their input into the debate about Black History in a modern-day context, and also special thanks to Cllr Katherine Dunne who chaired the event. We are making arrangements for these films to be viewed on the Council’s website. Photo shows Cllr Katherine Dunne, myself and excellent speaker Sundar Katwala from British Future. 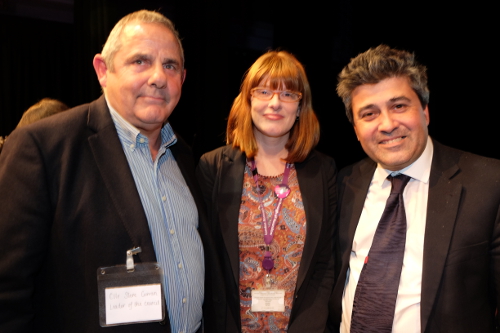 On Friday morning it was off to Feltham to visit a family who are concerned about the damage a tree is causing to the pavement and is a major trip hazard outside their property, I will be discussing this problem with Hounslow Highways in due course.
I then met Richard Clark who has led the charge on safeguarding and improving Bridge House Pond, this is a lovely oasis in Feltham. I would like to thank Richard and the members of his group who have done so much to improve the pond and the immediate area, they have also secured funding to help their cause. They’re doing this against the backdrop of the major bridge and road improvements in Feltham. Hats off to Richard and all the team for what they are doing.
In the afternoon I met Steven and Annie who represent the Park Road Allotments Society, with Christine Diwell, a well-known community activist. As people may be aware the allotments in Park Road, Isleworth are under threat of closure, we’ve been working closely with the Duke of Northumberland’s representatives to postpone the closure of the allotments for a further six months. The purpose of today’s meeting was to see if there is a way, we can all work together to secure the future of the allotments for the benefit of allotment holders, the Duke of Northumberland and the wider community.
Sadly, the England rugby game has been cancelled because of Typhoon Hagibis in Japan so I’ll be cheering on the guys from the Emerald Isle instead.
Have a good weekend, more next week.