The Brentford Towers are a longstanding landmark of the borough and for some time now it has been apparent that the fabric of the six tower blocks is deteriorating and needs some major work to prevent it continuing to worsen. On Saturday, we unveiled new signage to mark the beginning of the works to the towers, due for completion later this year. I was joined by Cllr Lily Bath, Cabinet Member for Housing and Social Inclusion, Ward Cllr’s Corinna Smart and Guy Lambert, Peter Matthew, Director of Housing, residents and council officers who took the opportunity to learn just how far back in the borough’s history these towers go. Each of the towers were named to commemorate some of the engineers and engines connected with the surrounding water works – dating back to the 1800s!

The independent Local Government Boundary Commission for England has been carrying out an electoral review of the borough. Recommendations were put forward late last year on new proposed ward boundaries and after consultation with residents, the proposals seem to be taking shape. This week, members were invited to provide final feedback on the preferred route forward. Watch this space!

At Cabinet this week, Hounslow's Transport Strategy, Local Implementation Plan was approved which sets out how the borough proposes to implement the Mayor of London’s Transport Strategy in the area until 2041. The overarching aim of the strategy is for 80 per cent of all trips in London to be made on foot, by cycle or using public transport by 2041, compared to 63 per cent today, with an additional focus on reducing the number of people killed and seriously injured on the roads to zero by 2041. We hope that with these ambitious plans we will also see a positive impact on air quality in the borough. Don’t forget there’s still time to have your say on the proposed new Cycle Superhighway 9 route that runs through Hounslow.

Our 2019/20 Budget Report was also approved at Cabinet, which recommends an increase in Council Tax.

As you know, by 2020 there will be no financial support from the Government and we are continuously exploring ways to deliver the best possible service for our residents with increasingly tightened budget constraints.

Staff across the council gathered to celebrate Hounslow’s 50th anniversary and to bid farewell to the building that has served us well over many years. It was also great to see ex-colleagues of the council in attendance reminiscing about their time here and how much it has changed. Residents also joined us for an evening celebration and a tour of the council chamber and Mayor’s Parlour. Thank you to those of you who attended, it was great to catch up over a cup of coffee! 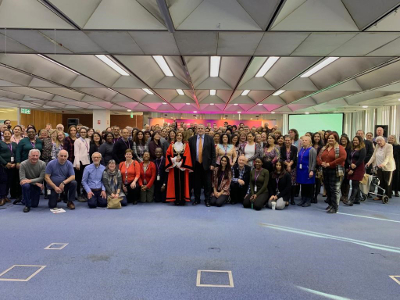 We’re entering a new era with the move to Hounslow House fast approaching. I was joined by our Chief Executive, Niall Bolger, for a tour and we both agreed it is looking great. I haven’t been to Hounslow House for almost six months and the last time I was there it was just concrete and wires. The building has now completely transformed into a fit-for-purpose work space with just the final touches left to be added. To top off the tour we went up on to the roof and I must say the view was fantastic – the blue skies certainly helped! 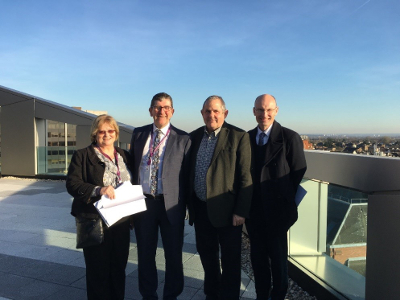 I’m working with residents across the borough who have raised concerns about their local area and will ensure we do the best we can to address these issues. In Feltham, I’ve been speaking with several residents who are concerned about fly-tipping in pathways behind their houses - which are used by local people to access the station and schools. The area is not owned by the council, so we will be working with the landowners and residents to tackle the issue to ensure we put a firm stop to anti-social behaviour.

Recently, I received a request from a resident in Isleworth to plant some trees in Teesdale Gardens and had the opportunity to do that today with Hounslow Highways. We’re committed to improving air quality and planting as many trees as we can is one way to do that. Later in the week I also popped into the Heston and Cranford Forum where, amongst other things, discussions were had on consultation regarding road and parking changes for Burns Way, Browning Way and Shelley Crescent.

I will be at my surgery tomorrow for those of you who wish to pop in to have a chat - you can find details on the council website.

On a final note, well done to Brentford FC for their 90th minute goal and win against Aston Villa. And as always, good luck to the boys in their next game against Swansea City on Sunday!