I’ve had a very busy week, very much occupied by dealing with the terrible news of the fatal stabbing of 17-year-old Abdirashid Mahoumad from Brentford on Friday evening. Our thoughts are with his family and friends, and we would recommend that anyone affected by this or other incidents should call the West London Victim Assessment and Referral Service on freephone 0808 168 9291.

We have been working with the police and our partners and agencies to make sure we can put a stop to this crime wave and on Wednesday we met with the police who confirmed our police resource through the West Area Command Unit has had a significant increase in officers including plain clothed officers who have been drafted in to deal with crime in the area and reassure residents. They will support our own police team and estate police officers – who are also stepping up their patrols in the area.

On Wednesday I attended the Housing Pledge Delivery Board, where we were joined by representatives from the Greater London Authority (GLA). This Board concentrates on the major task of achieving our Housing Pledge to deliver 5,000 new homes over four years and makes sure we are on track.

In the evening, I was delighted to be invited to the opening of the Adagio ‘aparthotel’ in the Great West Quarter in Brentford. This hotel has a range of apartments rather than traditional rooms. I recommend you try it out.  Whilst there, I met Andrew McCracken, who has recently taken over as landlord of the Six Bells in Brentford, opposite the bridge. He set up Jam Bars 21 years ago and is a respected restauranteur and bar owner. 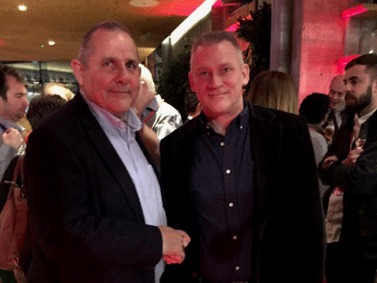 Here I am with Andrew McCracken at the Adagio Aparthotel launch

On Thursday I met Martin Slater, Head of Policy at the Angling Trust, an organisation which represents all game, coarse and sea anglers and angling in England and Wales. We want to encourage more people to fish in the borough, particularly young people, and we are supporting the establishment of more angling clubs with the help of the Angling Trust as they aim to develop the sport from grassroots participation through to elite performance. 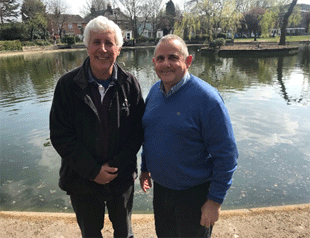 On Friday, I visited the Hounslow Community Food Box in Brentford, to officially open their new patio area adjacent to Food Box. The charity was set up by the council with the help of the community and supported by young people, and the logo was designed by local school children I would never have expected that Food Box would have to continue for quite so long. I would like to thank all the volunteers who do a fantastic job but rely on your donations – so please keep them coming.

Tomorrow, I am looking forward to meeting up with my old rugby chums at the Kingston Rugby Club old boys’ lunch.

On Sunday, I will clear my head by joining Councillor Guy Lambert, Cabinet Member for Highways, Recycling and Trading Companies, at the Great British Spring Clean in Windmill Lane, Brentford. We would encourage anyone who wants to get involved in helping to keep the borough clean and green to sign up to either organise a litter collection or join one of ours – you can sign up to the Great British Spring Clean through the Keep Britain Tidy website

Good luck to the Bees as they take on Wigan Athletic away on Saturday.