Hello everyone, I hope you’ve all been keeping well, it has been a very busy week with the move to Hounslow House and I can’t wait for it to open to the public.

Before I get into the meat of the diary, I’d like to congratulate both Cambridge Men’s and Women’s rowing teams after they both sealed victories in the annual Oxford vs Cambridge boat race on Sunday 7 April.

I joined the Mayor of Hounslow, Cllr Samia Chaudhary at the fan park along with local ward Councillor, John Todd.

I’d also like to thank everyone who came to our fan park at Dukes Meadows. It was a fantastic event and we received large amounts of positive feedback about it. We are hoping to host another in the future. If you have any comments or feedback about the fan park, please don’t hesitate to contact me at Steve.Curran@hounslow.gov.uk 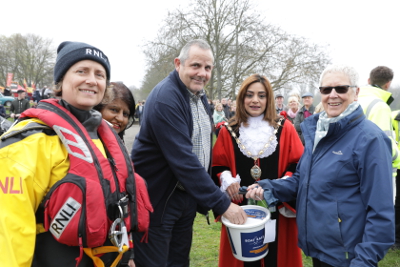 Myself and Mayor of Hounslow, Councillor Samia Chaudhary at the Oxford vs Cambridge Boat Race fan park in Dukes Meadows

On Monday, we had an office clear out as we prepared for our move to Hounslow House. Many council services have already moved in to the new building and we will be joining them shortly. Hounslow House will be opening to the public on Monday 15 April. In the evening, I attended the very last Labour Group Annual General Meeting (AGM) held in the Civic Centre.

I started Wednesday with a 9.30am meeting in Central London. I attended the Skills of Londoners Board meeting chaired by Jules Pipe, Deputy Mayor for Planning, Regeneration and Skills, Greater London Authority (GLA). I represent the West London Alliance Skills and Employment Board. It is vital we hold these meetings as it is one of our key pledges as a council to create 4,000 new apprenticeships and training opportunities to help our residents, particularly young people, into work.

I’d like to congratulate Brentford FC for their mid-week victory against Ipswich Town. The Bees won two – nil after a dominating first half performance.

Yesterday, I joined Cllr Guy Lambert in Brentford to meet the newly formed Friends of Watermans Park group. We are working with the group to protect and enhance the park especially during the development of the new marina. This is a joint venture between the council and the Port of London Authority.

While we were out there, one of the friends group members took us to see her new start-up business, The Maker Station. This is a collaborative arts space for our borough’s makers, artists and creatives. This unique space offers a hot-benching studio space available to hire out.

You can find out more information by visiting their website. I would like to thank Fay Young and Kal Watrobski for the invitation.

Today, I met with Councillor Joanna Biddolph, Ward Councillor for Turnham Green and some council officers on Chiswick High Road to see how we can improve the appearance and area around one of our air quality monitoring units.

I’d like to wish the Bees the best of luck this weekend as they are away to Reading. Let’s hope they can keep the momentum going and pull another win out of the bag.