Hi everyone, I hope you’ve all been out enjoying the sunshine this week as we move from spring to summer.

On Saturday I held my usual surgery in Augustus Close, Brentford. It was very busy with six of the residents raising various issues mainly regarding Housing

On Sunday, I was litter picking around Clayponds Lane.  I was there to support Councillor Guy Lambert, Cabinet Member for Highways, Recycling and Companies and our two volunteers. Thanks to all the residents who clean up the borough on behalf of our residents.

Councillor Guy Lambert is the big guy on the left! 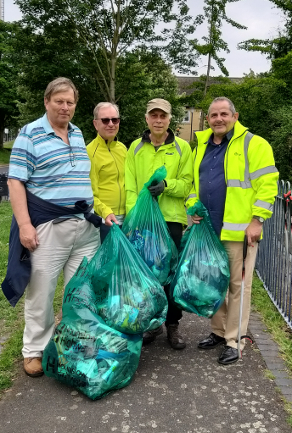 While on the clean-up we noticed that gypsies and travellers had gained access to Carville Hill Park South Park. We reported this to the police and our enforcement officers and I was pleased to find out that the notices were served within 24 hours.

Unfortunately, the law is very weak in this area and we have very limited powers to stop this activity.

I watched England seal a sweet four-nil victory over Pakistan in the Cricket One-Day Series on Sunday. Pakistan are visiting England on tour just before the ICC Cricket World Cup gets underway later this month. England take on the Proteas (South Africa) in their first World Cup Fixture on 30 May.

It was a very busy weekend!

On Monday, I started my morning in Ealing for a West London Alliance Leader’s special board meeting to discuss changes to the North West London region’s Clinical Commissioning Groups.

After my meeting in Ealing, I popped back down to Syon Ward to meet with a local resident and council officer to follow up on some casework. The resident had raised concerns about illegal parking and we met to see if we could resolve the ongoing issue.

In the afternoon, I was interviewed on camera for a trade film that Bouygues/LinkCityUK are creating. They are the developers who delivered Hounslow House, our new home in the centre of Hounslow and will be continuing to build over nine hundred homes on the old Civic Centre site on Lampton Road.

On Tuesday, I was very glad to host Amy Lamè, London’s Night Czar, to discuss plans for vibrant and safe nights across Hounslow. 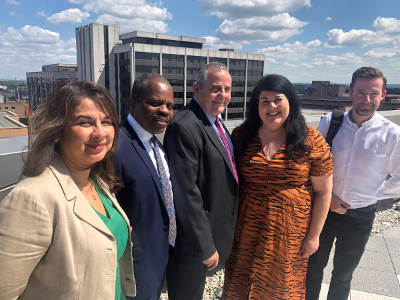 In the evening, I was delighted to attend the Mayor Making ceremony for fellow Councillor Tony Louki (Osterley and Spring Grove) who is the new mayor for this administrative year, 2019/20. I am also delighted to announce the new Deputy Mayor, Councillor Raghwinder Siddhu (Bedfont Ward)

I look forward to working with both Mayor of Hounslow, Tony Louki and Deputy Mayor Raghwinder Siddhu.

On Wednesday, I had my usual round of one-to-one meetings with senior officers and caught up with emails.

Thursday was European Parliament election day. I was invited to speak at a Breakfast Summit where a new technology skills programme, which aims to improve digital literacy and support digital inclusion across the borough, was commissioned.

The London Borough of Hounslow Tech Careers Camps & Awards programme identifies and trains Hounslow residents through a series of employer-led creative, business-led challenges that are designed to inspire and digitally up-skill participants. The likes of Google, Apple and Amazon, companies who are all leaders in the tech industry have supported programmes like this.

On Thursday evening, I was invited by the Osterley and Spring Grove Residents association for their annual general meeting

On Friday evening, I attended the Hounslow Jamia Masjid annual community Iftar. I would like to thank Shafiq Rehman for the invitation.

On Saturday, along with the Mayor of Hounslow, Tony Louki, I will be attending the Polish Heritage in Lampton Park to mark this important day for members of the Polish community in Hounslow.

It looks set to be a lovely Bank Holiday weekend, so all those suffering with hay fever, please make sure to take your tablets and for those hoping to do some sun bathing remember to put on sun cream!