Arrangements for procession through Hounslow

The Leader of Hounslow Council has expressed his condolences following the announcement of the death of Queen Elizabeth the Second.

Council Leader, Councillor Shantanu Rajawat, said; “Our late Sovereign, Queen Elizabeth the Second was the longest serving Monarch in this country’s history.  She visited the Borough on several occasions during her reign and will be remembered with affection and gratitude by residents, as she will be by people across the country and indeed the globe.

“The Queen’s devotion to public service was truly exemplary. Over a period in history that saw many momentous changes she provided a consistency that was invaluable to all living in our country. We owe her a tremendous debt of gratitude.”

As a symbol of our mourning, we have lowered our two flags – at Hounslow House, and at Chiswick Town Hall, to half-mast.

The Queen’s funeral procession through Hounslow

With many road closures in place for the Queen’s funeral on Monday 19 September, residents and visitors to Hounslow are being urged to follow local travel advice to help ensure the day goes as smoothly as possible.

See more on the arrangements for Her Majesty The Queen’s funeral procession through Hounslow.

Public information around the funeral of Her Majesty Queen Elizabeth II and Frequently Asked Questions.

See your messages of condolence for Queen Elizabeth II

Changes to Council events and services

Following the passing of Queen Elizabeth II, please be aware that as a mark of respect, planned events may be cancelled at short notice. Check with organisers beforehand to avoid disappointment.

The “Proclamation” is the official announcement of the new monarch.

Initially read at St. James’s Palace followed by the Royal Exchange in the City of London, the Proclamation will then be read the following day in cities, boroughs, districts and counties across the country.

As in all areas of the country, the reading of the Proclamation will be held here in the London Borough of Hounslow.  As part of this the Mayor will formally proclaim the death of the monarch and the accession of King Charles the Third to the throne. The local proclamation will be at Holy Trinity Church, Hounslow High Street on Sunday 11 September. This will take place at approximately 2.00pm – subject to the timings of the national Proclamation. 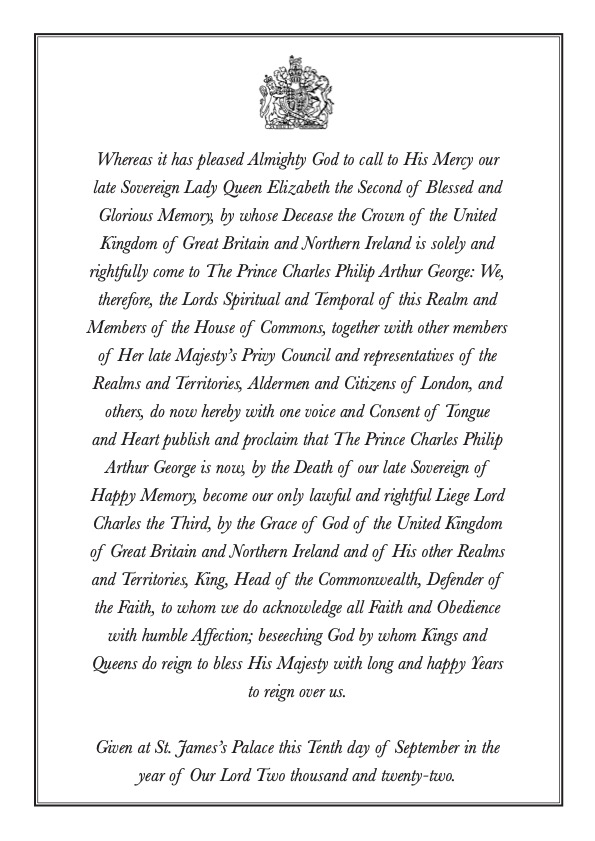 As part of the National Proclamation of the new monarch, flags are raised to full height from 11am on Saturday 10 September.

The main area for residents to lay flowers, if they wish to do so, is St James Park in Westminster.  If residents wish to lay flowers as a mark of respect within the borough we have also allocated space in the memorial space in Lampton Park and at War Memorials across the borough.